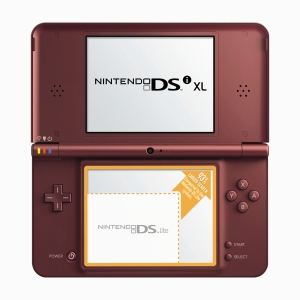 The Nintendo DSi XL has been out for a while and there have been many reviews and opinions about it.  Many have complained that it is too big (aka not portable).  This review will give you the point of few from a 40+ year old, long time gamer.

OK, so I’ve said I’m over 40 and you’re saying “of course you like the XL, you’re eye sight sucks.”  Let me crush that first.  While I do wear contact lenses, I am near sighted and have no problem seeing my DS Lite (yes, I still have my Zelda TriForce limited edition DS Lite).  But, being an adult, carrying it in my back pocket isn’t an issue.  So that’s why I’m not in the “it’s TOO big” camp.  The bigger screen has proven an excellent investment for me as I tend to play more puzzle games.  I’ve played both Picross DS and Picross 3D on the DS Lite, DSi, and DSi XL and I can tell you that the XL’s bigger screen really helps.  It brings a precision to the games that you have to experience to appreciate. Other than size, the XL’s screen does feel a little brighter than the DSi.  Since the screen has the same number of pixels as the original DS, one would assume that the larger screen would pixelate games.  This is not necessarily true.  While some older games, such as Mario Kart and New Super Mario Bros, do indeed pixelate a bit, once the action starts, it’s hard to notice.  Lastly, the screen has a wider field of view, which allows your friends and family an easier view of what you’re playing without them leaning on your shoulders.  The only other improvement over the DSi is the sound.  I’ve found the XL’s speakers to be both louder and brighter than the DSi.

So, if I already own a DS Lite, and had a DSi, why did I feel the DSi XL was worth the expense?  Well, the screen is the obvious reason, but the actual size of the console was a close second.  While my hands aren’t massive, they are big enough to feel cramped after playing on the DS Lite and DSi for several hours.  The DSi XL’s increased size is a lot more comfortable to me.  Of course keep in mind that I am writing this review on a 17″ MacBook Pro, so I obviously prefer my electronics to be more functional than portable.

So how do younger players feel about the DSi XL?  My two daughters, both under 10 years old and both original DS players, prefer it to the other DS consoles.  If the 3DS wasn’t coming out next year, they would both beg Santa for DSi XLs for Christmas.

Lastly, will I be making the jump to the 3DS in March 2011?  I’ll be the first in line for a midnight launch!  Will I keep my DSi XL or trade it in for the 3DS?  That will depend on if Nintendo will figure out a way for my to transfer my investment in DSi Ware.

Comments are welcome and I will answer all questions.